The President's "E" Award was created by Executive Order of the President on December 5, 1961, to afford suitable recognition to persons, firms, or organizations that contribute significantly in the effort to increase United States exports.

The President's "E Star" Award, which was authorized by the Secretary of Commerce on August 4, 1969, affords continuing recognition of noteworthy export promotion efforts.

During World War II, more than 4,000 "E Pennants" were presented to war plants in recognition of production excellence.

The famous flag with the big "E" emblazoned on it became a badge of patriotism in action. President Kennedy revived the World War II "E" symbol of excellence to honor and provide recognition to America's exporters. Thus, the "E" Award Program was established by Executive Order 10978 on December 5, 1961.

The "E Star" was authorized in 1969 to recognize "E" Award winners for continued efforts in export expansion. Winners of the "E" and "E Star" Award are authorized to fly the blue and white banner, to display the accompanying certificate of commendation which is signed by the Secretary of Commerce in the name and by the authority of the President, to wear and issue to employees an "E" lapel pin, and to refer to the award in their advertising. 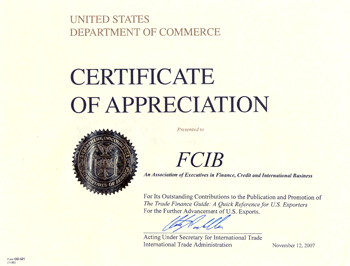 This Certificate of Appreciation was awarded to FCIB for its outstanding contributions to the publication and promotion of The Trade Finance Guide: A Quick Reference for U.S. Exporters for the further advancement of U. S. Exports.

This guide is designed to help U.S. companies, especially small and medium-sized enterprises (SMEs), learn the basic fundamentals of trade finance to turn their export opportunities into actual sales and to achieve the ultimate goal: to get paid for their export sales, especially on time. This guide provides general information about common techniques of export financing.